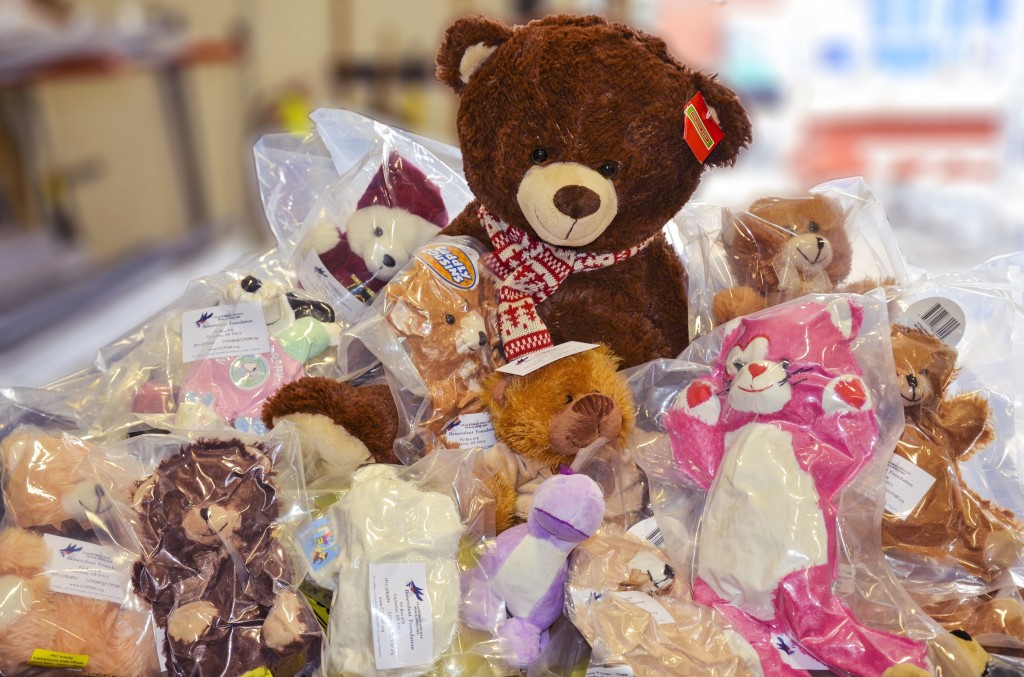 The Clackamas County Peace Officers’ Benevolent Foundation is one of many lucky recipients of teddy bears donated by the Portland Winterhawks. Each year the Winterhawks have one game with a Teddy Bear Toss, where fans throw a Teddy Bear onto the ice. Last year over 10,000 bears were collected in this manner and made available to non-profits all over the Portland Metro area. The CCPOBF Board President, Mark Koberstein, is a Winterhawks fan and season ticket holder. He goes annually to the Veteran’s Memorial Coliseum to collect bears. This year the CCPOBF was able to get about 750 bears. Many of these were given to kids during the annual CCPOBF Shop with a Cop event in December 2013 and will be held this year on Saturday, December 13, 2014. Historically, citizens have donated teddy bears to police and fire agencies so they can have them to give to small children during traumatic events. The soft, squishy bears to hang on to often help kids have a sense of security in these situations. Many police officers try to carry some bears in the trunks of their patrol cars. Many get dirty or take up a lot of space and officers often don’t take them. The CCPOBF is a member of the North Clackamas Chamber of Commerce, which graciously has allowed us to store our Teddy Bears. When they asked what they were for and told of the challenges for police officers to store them in their cars, NCCC President Laura Edmonds talked to Chamber member Pacific Seafood. They were willing to 'seal-a-meal’ the bears for free!

CCPOBF Board member Ken McCormick, a financial professional at Bank of America, volunteered to spearhead this effort and with the help of his son, Austin, they delivered the bears to Pacific Seafood, where they were seal-a-mealed. Austin also hand delivered some samples about a week earlier to see how things would work. They coordinated this effort with Jennifer Cavanaugh, the Executive Assistant to the CEO of Pacific Seafoods, Mr. Frank Dulcich. The bears are now sealed and shrunk flat. This will keep them clean in the trunk of a patrol car and will not take up much space. When opened, the bears puff back up to full size. The CCPOBF will be distributing the bears to all 9 police agencies in Clackamas County. The CCPOBF Board wants to thank Ken, his son Austin, Pacific Seafood, the North Clackamas Chamber of Commerce and the Portland Winterhawks for their help to get this great project done! Thank you! For more information about the CCPOBF, please go to our website at www.CCPOBF.org.