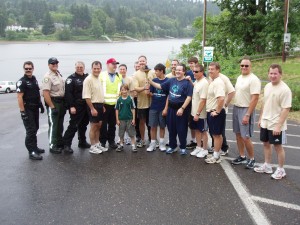 Five CCPOA members ran in the Clackamas County leg of the 2007 Law Enforcement Torch Run, which is a key fundraising event for Oregon Special Olympics. It is also an integral part of the opening of the annual Special Olympics Games, which are held in Hillsboro. CCPOA members Kevin Layng (Detectives), Emil Burley (Patrol), Scott King (Patrol), Greg Martin (Forensics) and Gary Burgeson (Jail) ran the course. Also running with them were Sheriff Craig Roberts and Lieutenants Paul Steigleder, Dixon Andrews and Todd Rollins. The CCPOA pledged to pay Oregon Special Olympics $100 for each CCPOA member who ran the Torch Run and wore a CCPOA shirt. The pledge was for up to 15 runners. The members of the CCPOA are proud of these five folks and their dedication to a worthy cause.