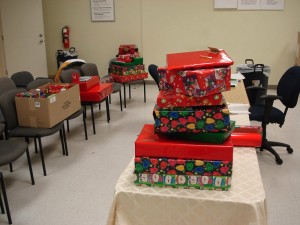 The Foundation and Macy's employees partnered this year to gather gifts for Christmas for those who could not afford them. Macy's chose to assist two ARC families and the CCPO Benevolent Foundation chose 6 kids in 3 families who had experienced serious domestic violence recently. The kids had been exposed to not only the violence and anger, but had to endure the resulting investigation, court and break up of the family. Some of the kids had developed a distrust of police officers during this time, mostly due to seeing a family member taken away in a police car. The Clackamas County Sheriff's Office Domestic Violence Enhanced Response Team was instumental in helping find the families in need and acting as a go-between. Deputy Sheriff Brad Leikem was given permission by Sheriff Craig Roberts to assist with the delivery of the gifts. He and Mark Koberstein, Secretary of the Benevolent Foundation, met at Macy's with Christy Hayes and Reba Dunnington and helped with the final gift wrapping. Then, with gifts and an artificial Christmas Tree for each family, they set off during heavy snow to make the deliveries. The kids and families were extremely grateful. The kids liked talking with Deputy Leikem and very much liked his Dodge Charger patrol car! The Benevolent Foundation hopes to coordinate an even larger event next year. A big thanks to the employees of Macy's at Clackamas Town Center and to the members of the Clackamas County Peace Officers Benevolent Foundation. [gallery link="file"]